I love Spring. I love pups. And I love taking pictures. Here are pictures from photo shoots this spring with Jack and his good buddies, Spec and Girlfriend.

It was Jack’s eyes that caught our attention when he was a tiny puppy. And when his eyebrows aren’t too long, you can still see them. Aren’t they the cutest eyes? He’s wearing his St. Patrick’s Day bandana in this photo.

Here’s Jack again in his lucky Irish bandana. I used one of The Pioneer Woman’s photoshop action to make this photo dramatic. Not that Jack needs any help with drama … 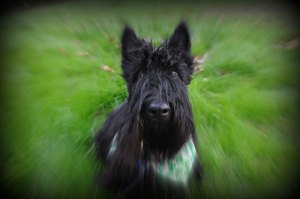 In the middle of this photo shoot, some people walked by. Jack’s always alert and he jumped up to bark and growl and watch the people until they left “his” street. (See what I mean by drama?)

Jack’s buddy, Spec, stays with us a couple of days a week. (He stays with us when Sandy, his human, is traveling.) Spec is 13 years old very wise. He’s also nearly deaf and doesn’t seem to mind Jack’s sonic bark. He’s a handsome guy. 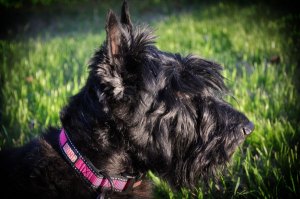 Girlfriend is the dog next door. Girlfriend is a miniature Schnoodle (Schnauzer and Poodle mix). She was Jack’s first friend after we brought him home. He has great fun playing with her. I took these pictures of Girlfriend one night when the light was so perfect and the grass so green.

Girlfriend’s got a hurt knee, so she and Jack don’t get to play together very often. Jack’s pretty sad about it. When Jack arrived, he was smaller than her. She still can’t figure out how he got so big.

If you are still reading after all this canine photo love, thank you — and here’s one last picture of Jack. Did I mention that I love, love, love the Spring. And pups. And taking pictures.

4 thoughts on “Jack and Friends”